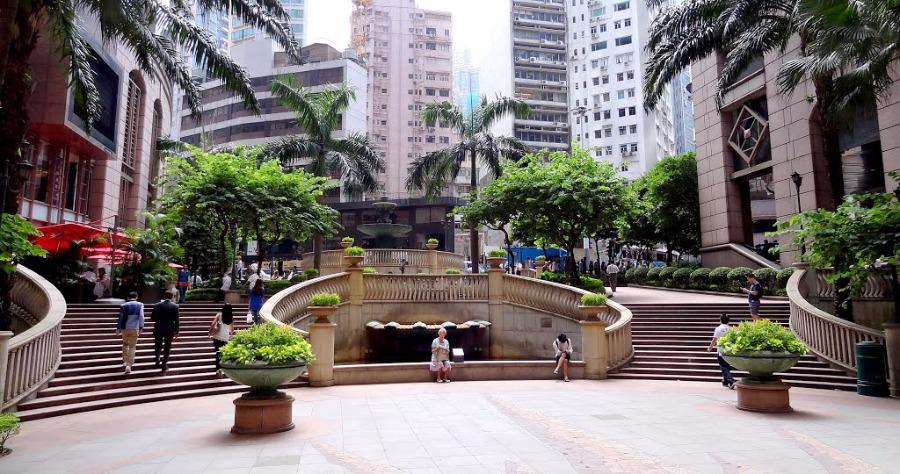 Hong Kong is the epitome of a post-modern, post traditional urbanscape, especially apparent in its open spaces. Plazas, squares, parks and trails are valuable place makers. These places, however, draw its inspiration from sources other than its British or Chinese culture. Rather, the design derives from contemporary or self-referential aesthetic.

The Millenium Plaza, for example, was built during the urban renewal project of the western district of the Island. The Plaza is a commercial development of buildings filled with offices and streetlevel restaurants. In the center resides a Baroque-like fountain and starecases for pedestrians, office workers and shoppers alike.

The style is similar to that of the Italian Renaissance piazza, a so-called Mediterranean Style.The style lacks connection to heritage and history of Hong Kong, but is a popular postmodern theme - Beverly Hills of California is also another example of development that borrows from the Mediterranean Style.

Kowloon Walled City Park, is another example of disparate selection of aesthetic. The City used to be controlled by China throughout Hong Kong's British colonisation period. In the 60's it was one of the most notorious slums in the world, ridden with chronic criminals and opium addicts. Demolished in 1993, a park replaced the site.

The Park borrows from classical Jiangnan style from the Yangtze River region of Mainland, a style commonly found in the eastern Chinese city Suzhou. Again, this lacks connection to the Canton, or Southern Chinese, heritage of Hong Kong.

The Kowloon Walled City Park and the Millenium Plaza are two prominent public structures in Hong Kong that does not attempt to represent the design most relevant to its identity. Instead, they reinforce the characteristic of the city as a disparate entity from the past and rather an autonomous selection of its future.